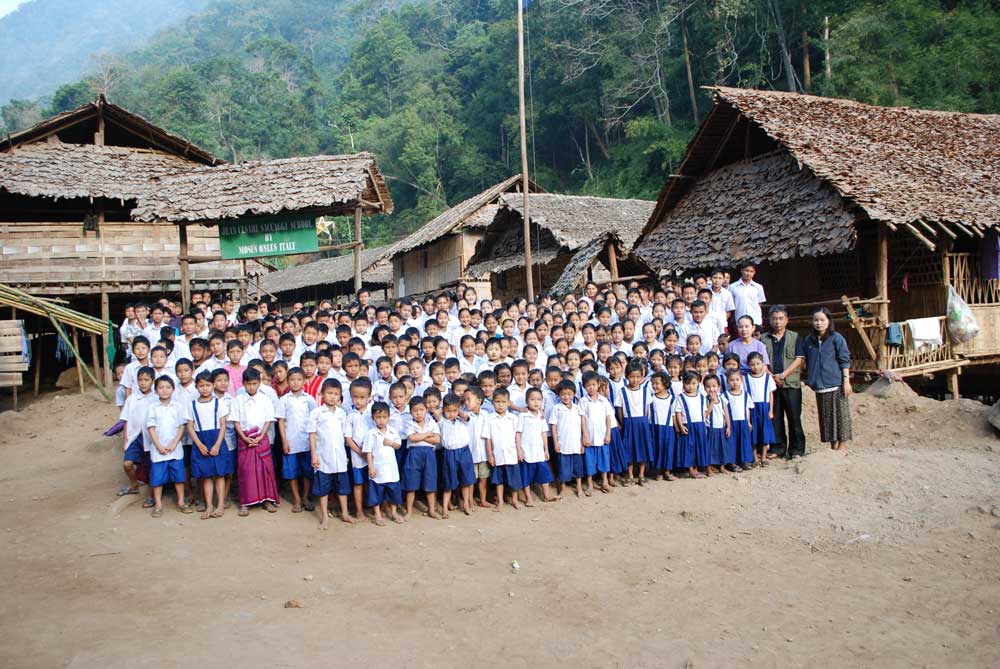 “School in the Jungle” is a schooling and health assistance projectdirected to some kayin communities that escaped the repression of the Burma authorities.

“School in the Jungle” is one of the first and most lasting projects that Moses Onlus undertook. The project started in 2007with the first initiatives in the U Way Klo refugees camp, one of the main communities in the region.  The initiative was then extended to the near villages of Hto Vee Der, Bo Ko Der, Lay Hta Ko and Lay Wa.

TheKayin Stateis located in North-East Burma (Myanmar), near to the Thai border. The ethnic group is kayin, and the religion is mostly Christian. Since over 50 years the population is suffering of an extremely harsh ethnic warthat brought to the elimination of entire communities. The kayin population escaped from the towns to the jungle, where they built villages and founded new communities.

This is the context where Moses is operating. We protect the weakest parts of the population, in particular women and children, by creating the basis for local development, decrease of mortality, social cohesion, life-quality improvement.

U Way Klois a village reachable through the Thai city of Mae Sariang, where Moses has a local office. Since some years Moses leverages on the vital contribution from Kitti and Koree. They are both Thai kayin, and they provide to the community their critical contribution in coordinating the teachers and the school committee. They deliver food and other support means and help Moses in its initiatives.

Moses’ main activity in U Way Klo is the Cesare Saccaggi school, built in 2007 together with the local population. The school hosts 200 children and youngsters with an age between 6 and 18.
The school also hosts students from the surrounding villages and it is an important reference point for the area.

Education and training are essential to the U Way Klo students. They can aim at going to the university or become, in turn, developers and promoters of their own communities. Some of the students that gained their degree in the U Way Klo school became teachers in the same school.

Every summer the teachers attend training and development classesthat Moses organizes at the Moses Training Center in Mae Sariang.


What cost does Moses incur?

Moses supports the “School in the Jungle” by providing:

Agricolture and fish farming for living

Moses recently started two projects for the cultivation of vegetables and fish farming. Two farms and two 25 sqm wide pools have been built just out of the village. The village inhabitants are assisted and trained in the sowing, growing, and harvesting of the cultivation.

The harvest is partially addressed to Moses’ school and hostel, and partially sold and the money invested in other activities. This provide the children a richer diet and makes the village more self-sufficient.