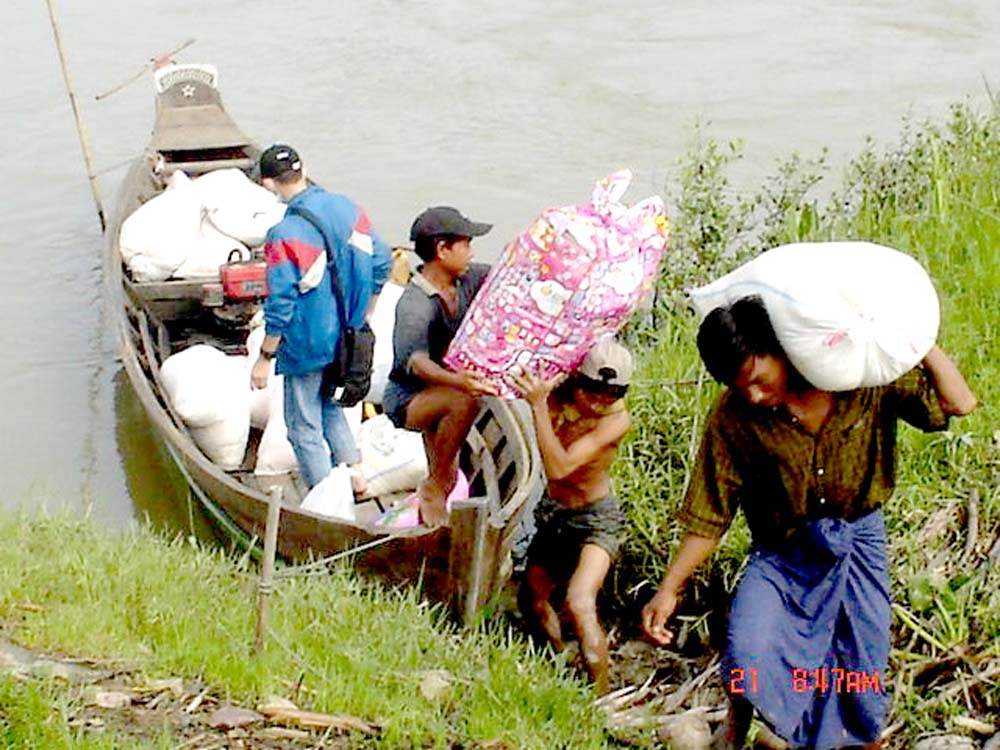 The emergency that the Cyclone Nargis caused was a challenge for Moses’ team.

To face that challenge, the exchange of information and the sharing of scope with ISCOSwas vital. Together, we agreed how to undertake the actions, together we collected the necessary funds. Together we intervened where even the most important and renown international agencies were – and still are – subject to the inacceptable conditions that the military authority imposed to the rescue teams.

The support from the Solidarity center from the Trento Provincewas crucial for the success of this project.

Between May 2 and 3, 2008 the Cyclone Nargissent a storm surge 40 kilometers up the densely populated Irrawaddy delta, causing catastrophic devastation in the provinces of Yangon, Ayeyarwady, Bago, Mon and Kayin, where almost half of the 53 million inhabitants of Myanmar are located. In the country’s biggest city and former capital city, Yangon, Nargis caused over 80,000 fatalitiesand at least 50,000 people missing. In the Labutta district, alone, there were 80,000 reported fatalities, growing up to 100,000 according to some reports. Damage was estimated at over 10 billion dollars.

This data confirms that Nargis has been the worst natural disaster in the recorded history of the area.

The military junta finally accepted aid a few days after USA and India’s requests were accepted. However, the military junta never plan for the distribution of the aids, nor tried to facilitate the work of the humanitarian operators.

The latest after-math related to Nargis in Burma raise to at least 10,000 the number of fatalities. According to the military junta, the cyclone killed over 84 thousand people, and 54 thousand are still missing. If was Kyaw Thu, the vice Foreign Minister, who reported this data during a meeting with local authorities, the UN, and Asean (Association of South-East Asian Nations) that also Burma is part of.

There are approximately 20 thousand injured people. UN valuates that little less than 2 million and a half displaced and homeless are in urgent need for aids, but the restrictions that the Burma militaries imposed have so far significantly slowed down the assistance operations.

According to UN sources, after over 2 weeks from the catastrophe, only 500 thousand of the 2,4 million people affected by the emergency have actually received some form of international aid. OCHA (UN Office for the Coordination of Humanitarian Affairs) stated that over half of the affected population, around 1,4 individuals, are in urgent need for help.

ACTIVITIES
The distribution of aids had its logistic reference point in the Yangon area. From there, the aids have been distributed via jeeps and pick-ups. To reach the most remote and distant areas of Ayeyarwaddy, bigger means of transport or boats have been used. Moses rented those means, to overcome the extremely difficult emergency conditions.

Our volunteers reached the area affected by Nargis, to distribute the aids directly in the hands of the people in need. The essential goods have been packed as follows:

The medical and paramedical personnel from MSKA reached the affected areas to provide medical assistance and coordinate the medicines administration to the people in need.

The activities have been brought forward with the help and the participation from the local references, including the religious leaders. Where possible, we established a connection with the local medical personnel, to implement a control procedure and further prevention activities.

What was the project’s added value for the involved population?

The areas where Moses’ help was more timely were those in the Irrawaddy’s delta. The volunteers assisted the children as first, and oldies and adults that had been wounded and that for any reason could not receive any medical care.

The aids to the most affected part of the population set back the present and real danger of more severe consequences, such as malnutrition, epidemics and endemics such as dengueand dysentery.

Children were mostly at risk, especially in regard to malnutrition. Without timely help, the consequences of the cyclone would have been even more tragic for those weaker individuals, who had already been neglected during a badly managed emergency situation.