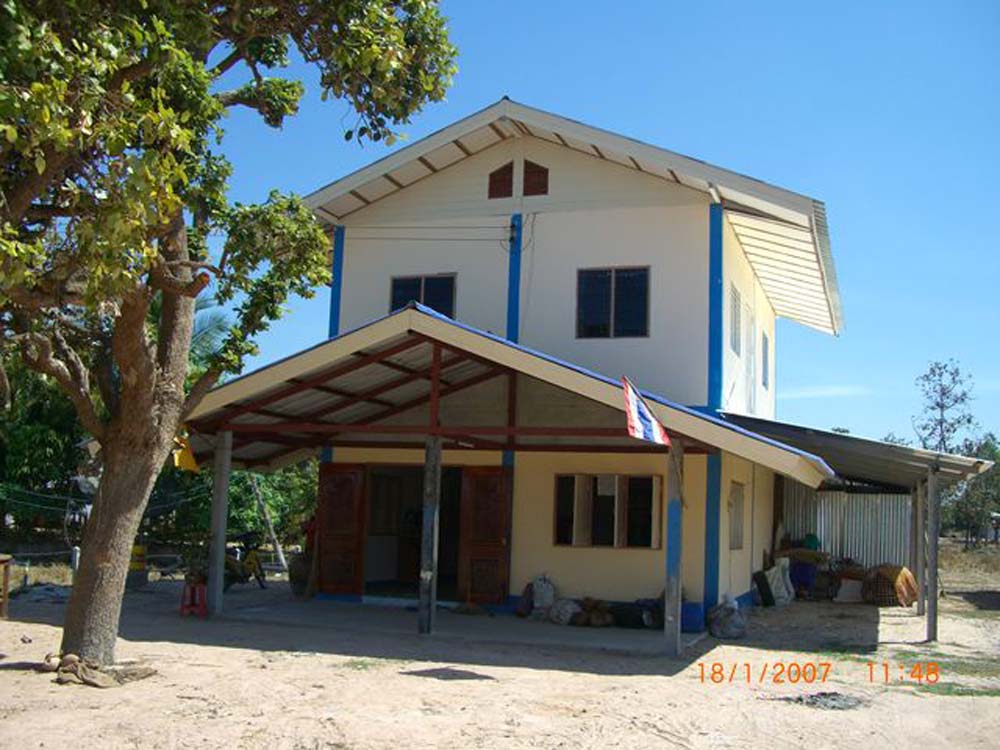 In Srikoraphum, in the Surin province– North Thailand– we built a house and promoted a self-sustainability project for a 10-people family. Hua and Pairat are the heads of the family

The houseis made of pillars and concrete blocks, is 50 sqm wide, and is organized in two levels: at the ground floor are the kitchen, the toilet, and an open space for the daily living. The first floor has two large rooms that the family members use for the night, with their traditional mats.

The initiative also included a little farming of fishes, pigs, and chickens, and a small vegetable garden, so that the family can self-sustain.

We leveraged on the valuable experience from Chauvalit Yingyune in defining the project, preparing documents and permissions, and track the work progress. Chauvalit’s availability allowed Moses to be physically close to the place.

The construction work started in May 2006. In July of the same year, the coverage and part of the walls were ready. In September 2006 the family started to live in the new house, and the final move was completed in the following months.

In 2004 Hua and Pairatrescued from the flood Patrizia Saccaggi and Francesco Baietti, two of the founding members of Moses Onlus.

Humble and generous, the two Thais helped the two survivors like brothers, gave them clothes, water, and most of all smiles and love.

Together with Patrizia and Francesco, Hua and Pairat climbed the Ban Sak hill, together they waited for the rescues until late night, together they trembled and went back to life.

A relationship made of looks and smiles, the most universal language: a poor link you may think, but the richest of the most precious gift: life itself.

We looked for Hua and Pairat, and found them, with a lot of difficulties, in March 2005.

The extreme poverty of Hua and Pairat’s family was hard to believe. They lived in a forest, in a shack, with no means, no help, forgotten.

Hua and Pairat came from the most affected Thailand area, the North-East. The tsunami had taken away even their humble jobs: he was a labourer, she was a peddler.

In the first months after the devastation, hope was scarce even for those who came from the affected area. Even less for those, like Hua and Pairat, who came from a different region.

We remembered well how Hua had generously supported the few survivors, so we wanted to know better their situation. We won their shyness and learned about their desire to go back to their place.

We first tried to help them in their daily needs, as they had done for us, but it was not sufficient, ten pair of eyes were there to remind us.

We then learned about a royal project about self-sustainability of the poorest Thai citizens, and decided to intervene.

The project was to get them back home, and give them not only a place where to stay, but where to self-sustain via agriculture and farming.A simple cycle where nothing gets wasted, and where everybody’s life gives life to others, simply, directly.

In October 2006 Hua and Pairat completed their house, and added some pigs and chickens, and a fishpond. Nothing can be wasted, in those circumstances.

Working the land was not difficult, and the hard work of Hua and Pairat was paid with generous harvests.

A small reality has born there, in the big Surin’s plane, where floods alternates with droughts, and where a poor family could start to live again with hope and dignity. The younger kids go to school, and they progress very well despite the difficulties. Their excellent school reports make the founders of Moses Onlus so proud of them.